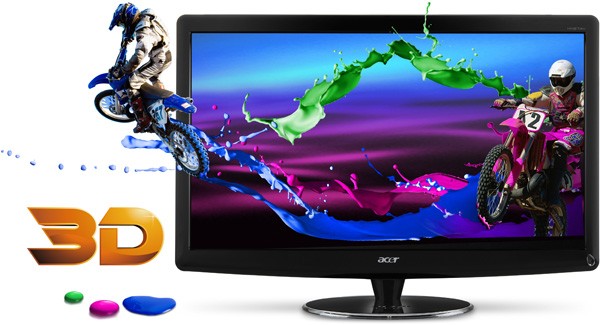 It is the 1st 27-inch LED-backlit monitor supporting both HDMI 3D and NVIDIA 3D Vision — Blu-ray or TV set-top box for the previous, PC gaming for the latter (via the same old DVI-DL). Though limited at 1920 x 1080 resolution, this display boasts a 100,000,000:1 dynamic contrast ratio with 300cd/m2 brightness and 2ms response time, together with a built-in IR emitter for the included NVIDIA 3D glasses, in addition to a handful of ports: VGA, DVI, and 3 HDMI. All this for $689.

New Acer HN274H 3D widescreen multimedia monitor is equipped with 2W stereo speakers, D-Sub, DVI inputs and three HDMI connectors. By the way, through its HDMI or DVI-DL can connecting to other compatible devices including 3D Blu-ray players, video game consoles via a set-top box.

A Bicycle Built For None