Sprint’s Nexus S 4G Will Launch on May 8th

Sprint and Samsung have finally pegged a launch date for the Nexus S 4G.  It has been about a month or so since Sprint announced that they would be offering a WiMAX 4G version of Google’s flagship Android device.  Now after some speculation on when the launch date would be, the 4th largest U.S based carrier went  public today and announced that the Nexus S 4G would be available starting on Sunday, May 8th. 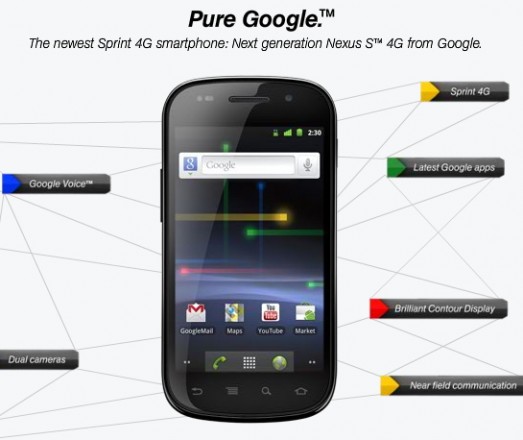 The Samsung Nexus S is the latest pure “Google Experience” smartphone available on the market today.  It is currently the only device to come loaded with the latest version of Android 2.3 Gingerbread.  The phone also includes an impressive 4-inch Super AMOLED contour display, 1GHz hummingbird processor, 5 megapixel camera, VGA front-facing camera,  and 16GB of internal storage.  But probably the most talked about feature on Nexus S, is the near field communication (NFC) chip and Gingerbread support.

Sprint’s 4G model has been up for pre-order on Best Buy’s site for the past few weeks, but more recently it has been listed for pre-order on Sprint’s website, along with a signup for email updates regarding any news on the Nexus S 4G.    What’s really interesting is this is looks like the first time that any version of the Nexus S will available outside of Best Buy’s grasp.  Sprint retail stores are expected to carry the stock Android 2.3 handset on May 8th

If you decide to pre-order the Nexus S 4G, your best bet might be sticking with Best Buy.  Wherever you decide to pick one up, you going have to shell out $199 and sign a new two-year contract with Sprint .