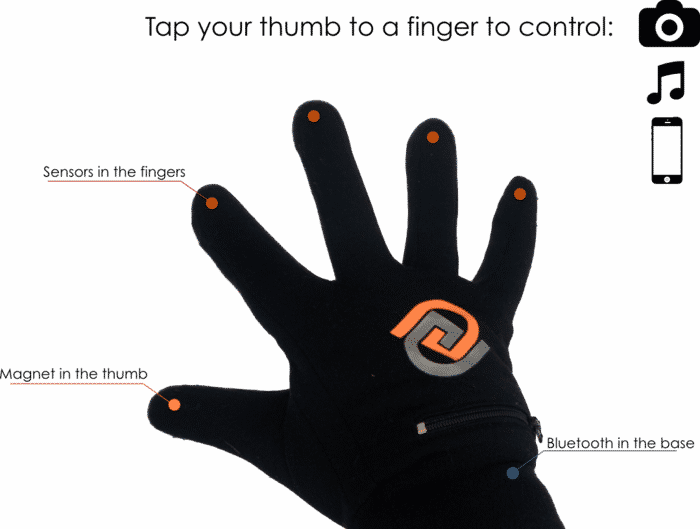 GoGlove looks like a normal set of thin gloves. It is designed to allow people running, biking, walking or hitting the slopes to use their music, camera, GoPro, or listen to texts by tapping their fingers rather than taking the phone out and manually using it. Users will be able to play/pause, skip/back track, volume up/down via this glove. There’s a Bluetooth module in the glove. It is connected to sensors in the fingertips. Each sensor controls different functions on the phone when it’s tapped. GoGlove’s main purpose is to give users more control over their devices. By connecting the gloves to the GoGlove app which is free, the user can set the function that each finger controls. The gloves are meant to be lightweight so they can fit inside thicker gloves in the winter. Besides, the gloves are resistant to sweat and light moisture. According to Ben Harris, co-founder of Easier to Use, which developed the GoGlove, “Whatever your phone can do, you can control with GoGlove. It’s a great concept when you’re flying down the mountain and a good song comes on and you kind of get in that moment and that makes everything better. Really we are just trying to make that experience easier to control.”” As of writing, the project has collected $39,402 from 257 backers.The project has 6 more days left to reach its goal. Here’s a video of GoGlove. People who will pledge $99 or more are supposed to get the glove in June, 2015. For more details, hit the links below.

Source: GoGlove
Thanks To: Kickstarter