Wacom announces capacitive stylus to replace puny human fingers for Apple iPad and Android tablets.Wacom’s many years of graphics tablet and digital pen making experience will hopefully put an end to such annoyances though and it’s got at least one of the major issues covered with the Bamboo Stylus………. 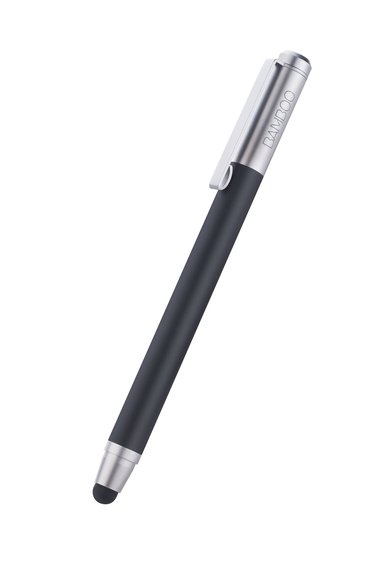 Wacom, maker of professional digitizer tablets and computer peripherals for artists has gone ahead and put its vote in the affirmative ith the upcoming release of the Wacom Bamboo Stylus for the iPad. Available in May for $29.99, the roughly pen-sized aluminum stylus works via a conductive barrel with the iPad’s capacitive display.The pen is designed specifically for the iPad’s capacitive screen and looks set to give you the precision and speed of pen-based note-taking, drawing and photo defacing.The Bamboo Stylus itself has a proper weight to it, like an expensive fountain pen, and really embarrasses other styli we’ve played with in the past- it’s certainly no lump of cheap plastic.The stylus itself weighs 20g, is 120mm long and is set to arrive in May, alongside several apps specifically designed to get your pen-based creative juices flowing.There was also a nice note-taking app for speedy handwritten notes. It’s certainly much faster and natural than finger-tip hand-writing.Wacom promise that their stylus will also work with other capacitive screen tablets, so if you’re an Android Tablet owner, the Wacom stylus will be compatible.The iPad has had styli available since its launch last year, and they’ve been functional but not wholly spectacular. The Pogo Sketch wis a narrow barrel was hard to grip, while its foam tip felt a little cheap. The Wacom Bamboo‘s tip has a smooth, rubberized surface, and gently gives when pressed against the iPad’s screen. It’s not truly capable of pressure sensitivity, but the gentle feel allows for more precision when using art apps, or even as compared with the slightly stiffer Pogo Sketch. The Sketch, however, is $14.95, half the price of the Wacom Bamboo.

Record Number Of Phones And Tablets Activated On Christmas Day