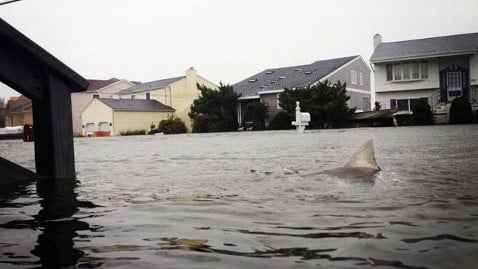 Hurricane Sandy has North America and much of the world’s attention right now. The east coast of America has never seen a storm this powerful hit them. With the world watching via television and social media, we’ve seen a multitude of photographs — but how many of them were real? We’ll show you how to determine whether these shots are authentic or not, just continue reading. With hurricane Sandy’s arrival, many people have taken photographs from the event and photoshopped them. As with the photo above, someone decided to add a shark into the scene. But how can you tell if these images are fake? Let’s go ahead and find out.

1. Find A Stream: You may have seen the picture of the statue of liberty where waves were nearly reaching the top of her head. There is a great chance you’ll find a webcam pointed at the scene; so just locate one and watch how high the waves actually are.

2. Time To Google: Typically people won’t take the time to photoshop an image; so they probably just stole one off of Google. If you saw an image of a flooded Mcdonalds, search it up on Google and look for its original posting date. If it was before the catastrophe, it’s a phony.

3. Ask Social Media: If you think it’s fake, ask your Twitter followers and Facebook friends for their input. An image featuring a shark in a neighborhood flooding is just too good to be true.

Have you found any images of hurricane Sandy that may be a fake? Just let us know if the method above helped you out.