BT Openreach launching 300Mbps broadband in the UK high in fibre and the U.K. will get 300 Mbps fiber to the home connections available on a wholesale basis. BT is already deploying the FTTP for commercial customers in six locations that will be ready by the end of October and the network offers 110/30 Mbps speeds, but by spring, it will offer the 300 Mbps download speeds. So it might not be a gigabit network, but with the UK joining the broad-band-super-speed-party, the US needs to up it’s gross point average of 5.3Mbps soon…………….. 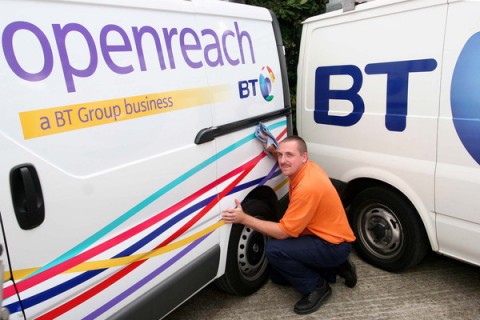 Newquay Cornwall Airport Will Be Used For Testing Drones

Openreach announced three significant developments that will provide a major boost to Broadband Britain. As well as launching its up to 110Mbps Fibre to the Premises (FTTP) service, Openreach revealed it will use this technology to deliver downstream speeds of up to 300Mbps from next Spring. These speeds are three times faster than those offered by other major networks and they will be available on a wholesale basis supporting a competitive retail market. The business also revealed a third boost for broadband speeds by saying it now has approval from the relevant authorities to roughly double the speeds delivered by Fibre to the Cabinet (FTTC) broadband. This development will see FTTC downstream speeds roughly double from up to 40Mbps to up to 80Mbps. These developments will transform the broadband speeds that are available across the UK. BT is investing £2.5 billion to make fibre broadband available to two thirds of UK premises by the end of 2015. More than five million premises already have access and tens of thousands are gaining access every week. Openreach chief executive Liv Garfield said: “Today is a significant step in the UK’s broadband journey. These developments will transform broadband speeds across the country and propel the UK up the broadband league tables.” Communications Minister Ed Vaizey said: “These are significant announcements and good news for the UK. High-speed broadband is essential for economic growth, which is why we want the UK to have the best superfast broadband in Europe by 2015.” “Improving the UK’s broadband infrastructure will help our high-tech, digital industries grow. It will ensure the UK is an attractive place to start-up and base the businesses of tomorrow.”

Garfield added: “All our fibre products are fit for the future and these developments show that to be the case. As always, we want to go further and faster and so our journey doesn’t end here. We can turn up the dial should there be demand and so we can look to the future with confidence. No-one is keener than us to extend these super-fast speeds to rural areas and so we will be bidding for public funds to help extend these services even further. The challenge is a tough one but by working with the public sector it is within our reach.” Openreach has this week launched its Fibre to the Premises (FTTP) service on a commercial basis. FTTP is where fibre is deployed all the way from a BT exchange directly into a customer’s premises. It is the most technically advanced broadband as it is the only one that is solely based on optical fibre. The service, which becomes available in six locations from late October before wider deployment, is open to all Communications Providers (CPs) to use on an equivalent and wholesale basis allowing them to market the service to end users. It is initially available to CPs in various speed combinations with downstream speeds reaching 110Mbps and upstream speeds reaching 30Mbps. The fastest speed combinations being made available this month are 110/15 and 100/30 but speeds of up to 300Mbps will be available from next Spring. The technology is capable of delivering even more dramatic speeds of up to 1Gbps and these are currently being trialled by BT in Kesgrave, Suffolk. The launch of FTTP builds on Openreach’s rapid deployment of FTTC broadband. This latter service – where fibre is deployed from the BT exchange to the cabinet and copper is then used for the final connection to the premises – is already available to more than five million homes and businesses. The recent approval from the network frequency authorities means that Openreach now has permission to roughly double the speeds delivered over the service at some stage in 2012.

London Olympics Will Be Live-Streamed By NBC

FCC’s $300 Million Will Bring Broadband To The Remotest Places In The U.S.

Future Generation Tanks Will Be Invisible To Thermal Detection