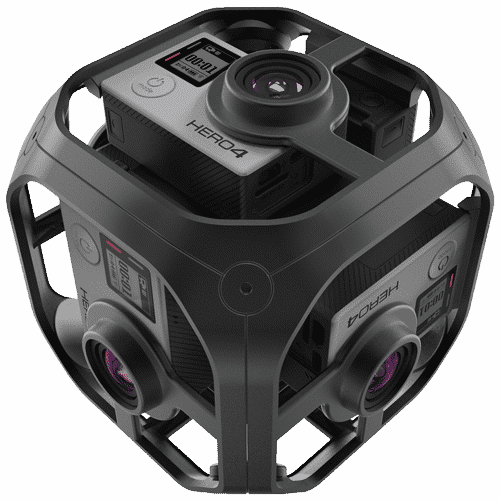 Can you imagine to turn your smartphone into a VR device and be in the middle of the action? Well, GoPro has announced new Virtual Reality camera kit along with releasing it’s GoPro VR apps for iOS and Android. Virtual Reality world is heating up as GoPro has unleashed it’s new camera and apps to view 360-degree and virtual reality content. After a year of announcing, GoPro has finally shown off their new plan for supporting VR filmmakers and fans on this Monday.

The GoPro VR app is already available on both Android and Apple devices. It offers a VR mode that will snap the video to make it compatible with VR headsets which are currently available only for iPhone. GoPro’s new Omni camera kit is basically constructed on six GoPro Hero4 cameras and it has got a dedicated rig along with a smart remote to control the six cameras at the exact time. It has used a 360-degree video editing software named Kolor which will help to stitch the individual recordings together and create a spherical video file. In easy way, it will let you capture the whole scene and create professional-quality spherical videos.

The company has also launched their official website on same day for 360-degree video content and you will able to get the apps from the website. You can also sign up and upload your 360° videos to share them with the world. In that case, anyone will be able to access your videos through the web, smartphones or on their mobile VR headset.

The GoPro VR camera kit, Omni will be available for pre-order beginning Monday on the GoPro website and it will cost $4,999. You can also download the apps from the link given below and let us know your virtual reality experience via comment.

Apple Tops The Fortune’s List Of Most Admired Companies