Loyal Google Docs users have been wishing and waiting for a some kind of native app to be released on one of the many mobile platforms.  It seemed logical that Google would take care of their own before any other platform.  Well, that wait is over!  According to today’s blog post on the Google’s Docs Blog, Google’s mobile developers have released the first official Google Docs app for Android devices.  Shortly after the app has made it first appearance on the Android Market. 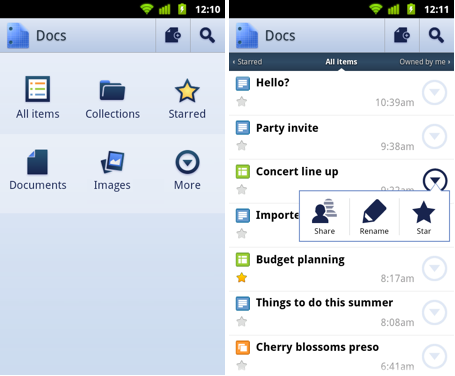 With today’s popularity of mobile devices and the need for access to information, documents, and storage on the go; Google has decided it was time for users to have a clean interface and direct access to the Google Docs service.  The app itself is still very basic in terms of features, and after browsing some user reviews, it seems the app is lacking quite a bit.

Regardless of those initial reviews, the core features are there for the users.  You can view, create, and edit all of your existing documents and at the same time create a new document from scratch.  You can also upload new documents from your phone or device, and the app will automatically convert the upload to Google Docs format.  You can view documents directly from Gmail, and share your documents with anyone on your phone’s contact list.  But probably the coolest feature is the ability to take picture of printed text and convert it to a usable and editable document.  Its basically a raw scanner, the text is converted using OCR, and instantly upload to the cloud.  There is also a cool widget you can add to your home screen.  It gives the user fast one-click access to some of the basic features of the app. 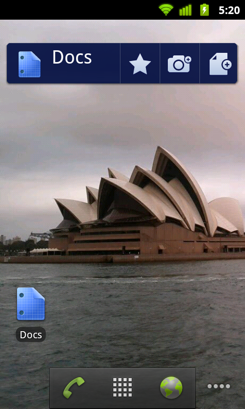 The only miss I can see so far is that you must be connected to the internet or have a running data connection to be able to edit any documents using the Google Docs editor.  It is mainly for users that need to edit and sync documents, spreadsheets, and PDF’s in real time.  The average user will be content with using the traditional desktop version or the mobile web version that was launched back in November.

If the Google Docs app for Android sounds interesting and is something you can live without, then you can head over to the Android Market and download it now.  You will need a device with at least Android 2.1 or higher for the app to work, otherwise happy editing!

White iPhone 4 Could Be JailBreak By Limera1n