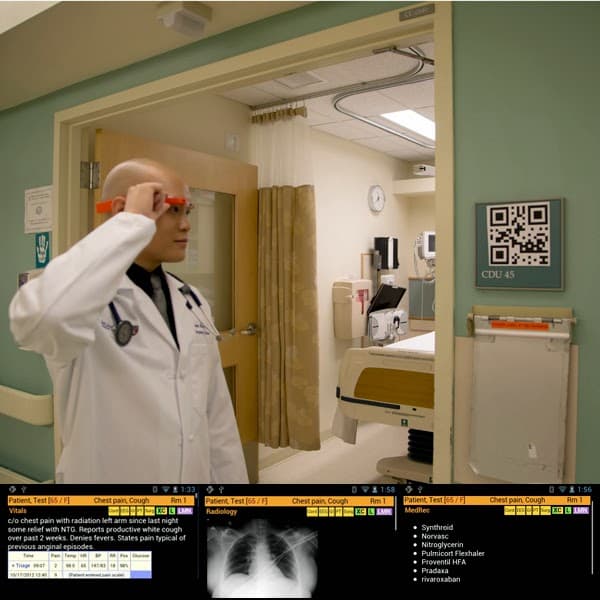 Although Google Glass is certainly not a best-selling gadget, vendors, software makers and consumers are very interested in it. And now, this glass has even made doctors interested to use it. What we have come to know that some doctors are testing Google Glass to get real-time patient data. Over the last few years, we have seen a number of apps which let people snap shots of a foreign text with a smartphone or tablet and then translate it to whatever language they prefer. But now, Google Glass can translate any foreign signs that people see with it. On the other side, Google Glass could be very much helpful to doctors. Using this glass, doctors won’t have to use their hands to dig through files, search computers, or look up facts on a tablet. Rather, with a simple nod of the head or blink of the eye, they could get all of the real-time information they need without having to leave a patient. Dr. John Halamka, chief information officer (CIO) of Beth Israel Deaconess Medical Center, Boston, has mentioned that the medical center has been testing Google Glass with four of its emergency room doctors for the past three months. The center found that the wearable has proven helpful with getting summarized real-time information to the doctors.

Regarding the technology, Halamka has said, “When a clinician walks into an emergency department room, he or she looks at [a] bar code (a QR or Quick Response code) placed on the wall. Google Glass immediately recognizes the room and then the ED Dashboard sends information about the patient in that room to the glasses, appearing in the clinician’s field of vision. The clinician can speak with the patient, examine the patient, and perform procedures while seeing problems, vital signs, lab results and other data.”

Halamka has also said, “We believe the ability to access and confirm clinical information at the bedside is one of the strongest features of Google Glass. I believe wearable computing will replace tablet-based computing for many clinicians who need their hands free and instant access to information.”

Using Google Glass, the said four doctors of Beth Israel Deaconess Medical Center are able to access the medical center’s internal web-based emergency room dashboard. That means, the doctors are able to speak with and examine patients at the same time they see the data from the dashboard. It is to be noted here that while they do so, all the patient’s data remain safe within the center’s firewall.

Halamka has confirmed that no patient has complained regarding the use of this device during their treatment. He also confirmed that the medical center will “continue to test Glass with more of its doctors.”