Just about everyone who owns a decent smartphone will at some point in their lives have had a play on Angry Birds and this application has been downloaded nearly 140 million times and is the biggest selling app of all time. Mobile phone speed test website Geekaphone has put together this juicy little infographic to clear up any doubt smartphone sceptics might be having and Geekaphone has put together a rather sexy infographic with tons of stats about gaming and revenue and tablets and what not…………… 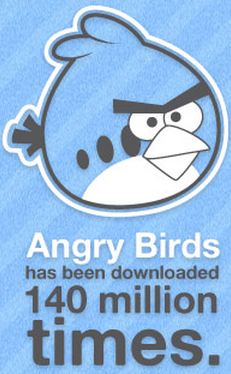 In the past video games came on cartridges, you played them on a big fat tube television in your parent’s basement and you told your friends about the level you reached at school the next day.   Now you might still be living in your parent’s basement but the future of gaming is solidly mobile. Anywhere, any-time, high quality gaming, that fits nicely in our pocket and the mobile entertainment industry was worth $33 billion last year, which is due in part to the success of smartphones like the iPhone and the plethora of Android devices like the HTC Thunderbolt.  These high powered computers were just waiting for people to turn them into gaming consoles. The industry is undergoing a titanic shift, factors like the ease of publishing to the App Store, the extremely low cost to become a developer, the growth of Freemium games (games given away for free with revenues coming from alternative sources) and the rise of the female gamers (53% of mobile gamers are female) are rewriting the rules and making millionaires overnight. Geekaphone has taken an in depth look at the numbers and stats behind the industry and have put together this informative infographic, all you have to do is pause your game for 1.4 minutes to take a look and also some of highlights below: