Packard Bell now has a tablet with the Liberty TAB, a  nice design for a tablet that Android has a family resemblance to his cousin.Packard Bell is a subsidiary of Acer, it is not surprising indeed not to find similarities with the Acer Tablet Tab Iconia A500 and Packard Bell Liberty Pad runs on Android 3.0 (Honeycomb), has a 10-inch screen on which it displays 1280 by 800 pixels……….. 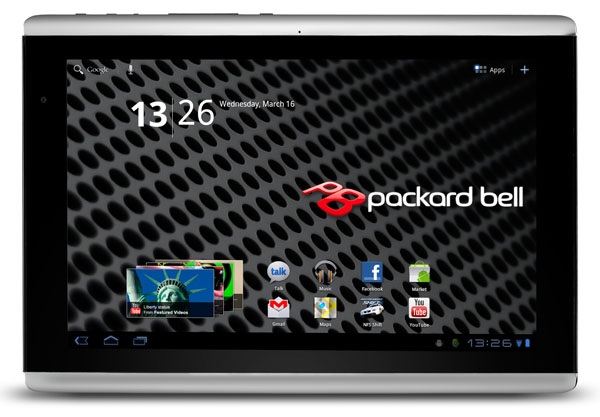 Packard Bell has announced a new Android 3.0 Honeycomb tablet. The tablet features a design that should be all too familiar to you if you have been following Android tablet news. The Packard Bell Liberty Pad is a near carbon copy of the already unveiled and incoming Acer ICONIA Tab A500.Packard Bell’s Liberty Pad offers similar design on the outside to the A500 and the tablet also has a lot the same technical specifications. The Liberty Pad like the A500 offers a 10.1-inch WXGA (1280×800) resolution touchscreen; 1GHz Nvidia Tegra 2 dual-core processor; Android 3.0; front 2MP and rear 5MP cameras; Dolby Mobile audio; USB port, HDMI, micro SD (up to 32GB); Wi-Fi, Bluetooth, GPS and 3G mobile broadband.Both the Liberty Pad and A500 will launch in Europe but the Pad won’t ever leave Europe. The Pad is going to be exclusive to Europe while the similar A500 will be launched in the U.S. under the name A500 (Wi-Fi only) and A501 (Wi-Fi + mobile broadband) just like it will in Europe.Packard Bell will launch the Pad in June but given that the A500 will be launched this month in Europe you can just pick it up if you can’t wait. Prices for the A500 have been set at €449.99 and the A501 at €529.99.