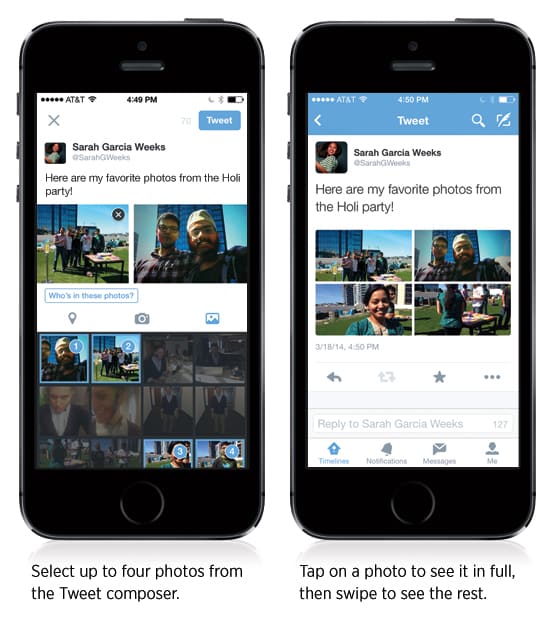 Facebook and Twitter tend to borrow features from each other on a routine basis. This is Twitter’s turn now and the site has added ‘photo tagging’ to its Android and iPhone apps. The photo tagging button appears when you upload a photo through Twitter’s Android or iPhone app. As soon as you upload the photo, a ‘Who’s in this photo’ bar appears. Hit that bar and you are allowed to tag up to ten people in that particular photo.

The best part is that tagging these people no longer takes any space within your tweet. So essentially, it is not like adding a lot of Twitter handles and ruining the tweet and the photo both. Rather, the feature is pretty much the same as photo tagging we have seen on Facebook. Again, like Facebook, Twitter offers customizable settings for such photo tagging. In the Settings, you can limit who can tag you in photos. While the feature is available only on the apps for now, the tagged people show up in the tweet over the web version.

Another new feature that Twitter has added to its mobile apps is the ability to upload four photos at once. This shows that the micro-blogging website is now aggressively moving towards a photo-centric user experience. It is becoming somewhat of a mix between Facebook and Instagram, and so far the recipe seems to be working out well for Twitter.

The photo tagging feature is really useful because it makes content discovery easier and makes it possible for the viewers to identify the people in a given picture. Imagine the viral Oscar selfie that racked up more than a million retweets. If this feature was available back then, more than a million users would have been able to find the direct profile link of all the celebrities in that selfie, enabling those celebrities to connect directly with these users and bump up their followers by a huge margin. Not a problem, though. One can always look forward to the next year’s Oscar selfie.