It would appear that selfie is on its way to formal recognition. Apple has now rolled out a special selfie section on its App Store. This section features a plethora of apps which can be used to take selfies. 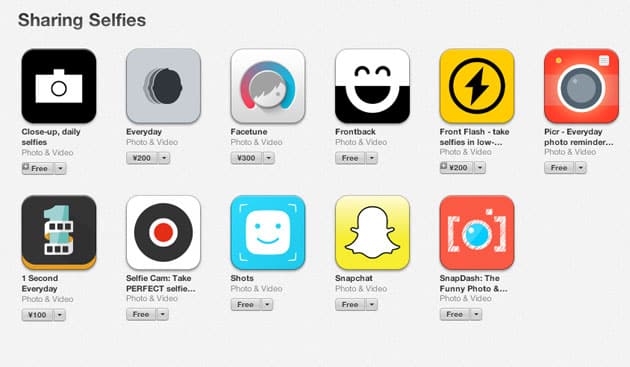 Selfies have apparently shot to the top of popular online things-to-do ever since the famed Oscar selfie went truly viral. This doesn’t meant that selfies haven’t been popular already, only that the Oscar win made selfie a well-highlighted member of the internet meme-vernacular.

Now that Apple has jumped the bandwagon, that may further fuel the popularity of the selfies. In a new section at its App Store, Apple has brought together a number of notable popular selfie-taking apps. These range from the popular Snapchat to more feature-oriented ones like Front Flash which lets you take the right selfies even in low light.

This new app section is apparently temporary and is currently featured on the front page of App Store, for both iOS and Mac users. You may not have been swept away from the selfie-fever yet, but here are some apps which you may want to check out.

Among the apps that the new section contains, here are a few useful ones:

For more offerings, head over to the App Store and check out the new section.

[Video] An Astronaut Was About To Die Due To Water Leakage Into His Helmet, But Survived

Send People Self-destructing Messages Via OTR App From Your Computer!