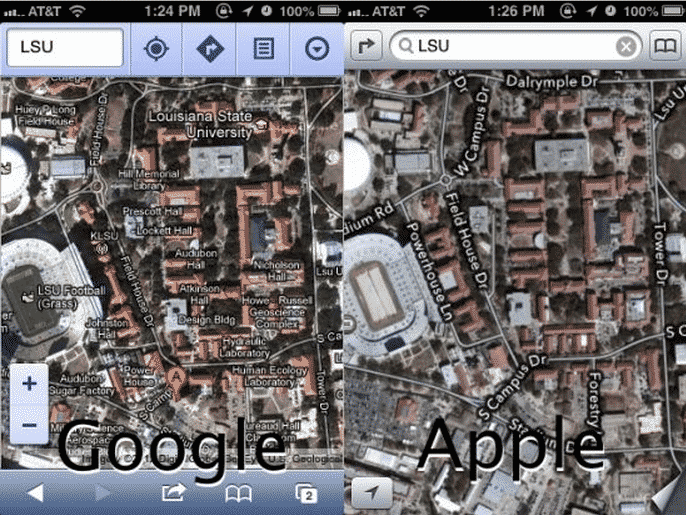 Google Maps is very useful for finding one’s way in unknown places. The best thing of Google Maps is it can be used used offline too. You can even measure distances using Google Maps. But when Apple released its own Maps, it started to grab customers’ attention more widely and hence, Google Maps started to loss its users. And now it’s been reported that Google Maps has lost millions of users due to release of Apple’s Maps. Earlier, Apple had no map of its own. So the company used to use Google Maps in its iOS system. But due to vast popularity and acceptance of Google Maps to its users, later Apple decided to create it own map which will be called Maps (Not ‘Apple Maps’ or ‘iMap’). And hence, Apple hired ex-Google Maps personnel to work on its Maps. However, since the release of Maps that includes flyover and turn-by-turn navigation, it has taken a significant amount of users away from Google Maps, despite the availability of a Google Maps app for iOS. Andrew Lipsman, an analyst at ComScore has said, “For the average user, even if they have the Google Maps app, they don’t use it a lot. In a narrow window [after the iOS app download became available] I’m sure there was a ton of activity, but only for a short period.”

However, now ComScore has revealed that, in September 2013, out of 60.1 million iPhone users, 35 million users used to use Maps at least once in that month. On the other side, based on a total of 43.2 million maps users in all, it’s been estimated that there are about 8.3 million Google Maps users. That’s not all. It’s been also calculated that there are around 6.3 million users who use Google Maps on a monthly basis. All these clearly indicates that Apple’s Maps has snatched huge amount of Google Maps users within its system.

iWatch Trademark Held By Non-Apple Companies In US And UK