It’s time to defeat the Hidden bomb. Bad Luck for a bomb that it can’t kill or harm any people further longer! Since long, Navy scientists have been trying to detect a bomb in a very safe and secure way, where a sensor will be strapped to a robot by bomb squads which will hunt for bombs by blasting the ground with sound waves. Finding the bomb through this process is called ‘GREMLIN’.

Actually, full form of GREMLIN is Ground-Based Explosive Ordinance Disposal Mobile Laser Interrogation. (Well, not the perfect full form of GREMLIN but close enough). Brian Almquist, the Navy’s program officer for GREMLIN, explains that the sensors will use an “acoustic source, something that makes noise” to vibrate a patch of turf. Basic principle of GREMLIN is studying the patterns of waves when they are disrupted by a stimuli in order to develop an image. It is only designed to find bombs, not to blow them up. 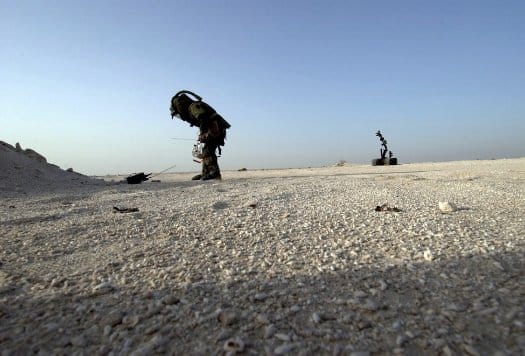 Earlier this month, the defense giant BAE Systems of US got $2 million from some desperate scientists to look into possible GREMLIN technologies for bomb squads. Definitely, it’s not easy to find a bomb from a distance, especially when they are hidden under a road or a pile of trash, but if all goes according to plan then Explosives Ordnance Disposal (EOD) operators will be able to see beneath the ground before they start digging the ground around looking for a suspected Improvised Explosive Devices (IEDs).

“We put sound into the ground, things vibrate and we image that expression of that vibration on the ground,” Almquist tells Danger Room.

Well, the system will run at least three years for initial tests to search bombs or mines on the dry land. Almquist says, “so we can detect things in the ground rather than have a person go out there to risk their life.” At least if something goes wrong, then it’s the Robots who will pay their lives rather than Human beings.